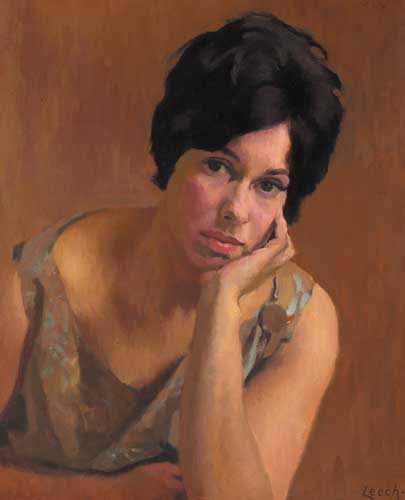 After the First World War, when Leech returned to London, impoverished and his marriage to Elizabeth failing, he was unable to paint. To encourage Leech back into painting, his brother Cecil introduced him to Percy Botterell, a successful London solicitor, who commissioned Leech from 1919 until 1923, to paint his wife May, his two sons, Jim and Guy, his daughter Suzanne, and himself. May Botterell, then replaced Elizabeth as his favourite model and became his lifelong companion. Leech did not accept any further commissions until he undertook, this, his last portrait commission from Chloe Abbotts father-in-law, in 1965, to paint his new daughter-in-law.

Leech, at this time, was depressed after Mays death and felt unable to paint. The portrait took six months to complete with two or three sittings every week. Granted Leech was then over eighty and getting slower. He was not a prolific painter, often waiting long periods for inspiration, for a change of light or for suitable subject matter. His young neighbour in West Clandon, near Guildford in Surrey, Chloe Abbott, befriended him and kept a watchful eye on him because she knew he was depressed, not just because of his loneliness but also because he had been diagnosed with cancer. She was young, vivacious and interested in art and she encouraged Leech to begin painting again. As a result he completed some of his last self-portraits and views of his garden. The day he slipped out of the back of his house in West Clandon and walked to the railway bridge from which he fell, Chloe Abbott was entertaining a friend in her front sitting room and unfortunately missed his departure.

Leech recounted his life as an artist to Chloe Abbott. He told her of his years painting in France, which he loved and then, his time in Steeles Studios, Hampstead, London. He missed the company and the conversation of other artists and the loss of May, his constant companion for forty-six years.
Leech has captured the soft youthfulness of this young bride with her hauntingly sad look, perhaps an early indication of a marriage that was not to last long. The artist has lost none of his painterly dexterity in depicting the light, falling on her face and arm, the diagonal thrust of her body, yet capturing a true likeness which made her instantly recognisable to me when I met her nearly a quarter of a century later.

Dr Denise Ferran
January 2007
Whyte & Sons Auctioneers Limited, trading as Whyte's, hereinafter called "the auctioneer" exercises all reasonable care to ensure that all descriptions are reliable and accurate, and that each item is genuine unless the contrary is indicated. However, the descriptions are not intended to be, are not and are not to be taken to be, statements of fact or representations of fact in relation to the lot. They are statements of the opinion of the auctioneers, and attention is particularly drawn to clause 5 set out below. Comments and opinions, which may be found in or on lots as labels, notes, lists, catalogue prices, or any other means of expression, do not constitute part of lot descriptions and are not to be taken as such unless they are made or specifically verified by the auctioneers.