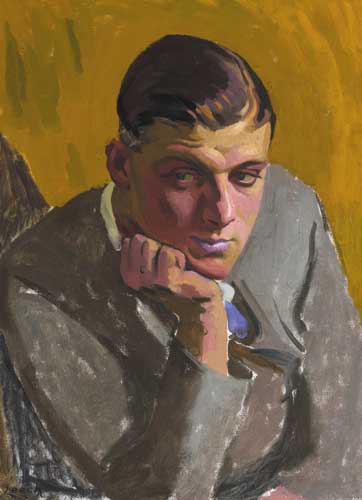 James Botterell was the eldest of the Botterells three children and he had remained at school in Winchester, England during the war years. Contemporary photographs show James (Jim) Botterell at Clayesmore School, Winchester, where he excelled at athletics and played the saxophone in the schools band. Leech painted this portrait of him, c.1923, when he was a boarder at Winchester. A contemporary photograph of Jim1, taken at his mothers apartment at 24 Hamilton Terrace, London, after she had moved out from the family home at Coombe-Edge, Hampstead, shows Jim as a tall, handsome young man, similar to the image captured by Leech in this portrait. As an artist, Leech had the ability to catch the likeness of his sitter as was the case in his portrait of Chloe Abbott in 1965, forty-three years later. Leech captures Jim, wiser beyond his years, resembling his father, in the shape of his head, the strength of his nose and forehead and the parting of his thick hair. He felt the break-up of his happy family home, very deeply, retaining a deep respect and love for his father and a love for his mother, a mood conveyed in this portrait. In conversation in the 1980s he recalled how vividly he remembered his mothers visit to Winchester, when he was seventeen, to tell him of her new love affair and her intention to move out of the family home to Hamilton Terrace to be close to Leechs studio in Hamilton Mews. However, May and Percy Botterell maintained a cordial relationship and family time was spent during the holidays at their large family home in Hampstead and later in the Botterell home in Burley in the New Forest, when Percy Botterell moved out of London. After his fathers death, Jim and his wife Eileen, still continued to entertain the couple at Burley for long visits, especially during Mays later illnesses.

Dr Denise Ferran,
March 2007
Whyte & Sons Auctioneers Limited, trading as Whyte's, hereinafter called "the auctioneer" exercises all reasonable care to ensure that all descriptions are reliable and accurate, and that each item is genuine unless the contrary is indicated. However, the descriptions are not intended to be, are not and are not to be taken to be, statements of fact or representations of fact in relation to the lot. They are statements of the opinion of the auctioneers, and attention is particularly drawn to clause 5 set out below. Comments and opinions, which may be found in or on lots as labels, notes, lists, catalogue prices, or any other means of expression, do not constitute part of lot descriptions and are not to be taken as such unless they are made or specifically verified by the auctioneers.