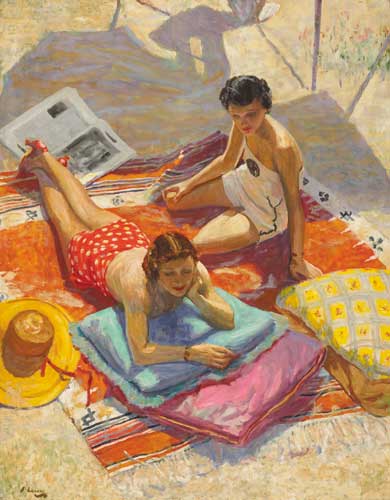 Undeterred, the painter embarked upon an ambitious project to paint sunbathers (fig. 1). Looking down on Lillian and Diana, Lavery faced the task of painting foreshortened figures. He originally included himself in the upper portion of the composition, engaged in painting a more orthodox view of the figures, the back of the villa and the Coutts daughter, Mary (fig. 2). The empty deckchair under the arcade in the background of this unlocated picture-within-the-picture marks the spot from which the present canvas was painted.

The upper section of Sunbathers, in the present canvas, was later removed, probably in Laverys lifetime, and it has not been recovered.3 His shoes, which would have been visible about six inches from the top of the present canvas, have been painted out. Very slight adjustments also appear to have been made to the edges of the shadow of his white sketching umbrella, while all other details remain the same. It is probable that since the pictures first owner was Laverys old friend and patron, Sir Patrick Ford, that the proposed reduction was by mutual consent. 4

None of these issues surfaced when the picture was first exhibited at the Royal Academy. The Times for instance was more preoccupied with the fact that Lavery had forsaken the furs and rich fabrics of his usual portraiture for a more carefree attitude to dress. The incongruity of Lillians spotted shorts and high-heeled red evening shoes was noted.5 At the time of the pictures completion, Ford was involved in a Lavery exhibition at the Victoria Art Galleries of the Albert Institute in Dundee. In his Foreword to the catalogue Ford hailed Lavery as a sound craftsman and genius;

through the experiences of years he preserves the freshness and courage of youth. No new subject daunts him, and some of his most successful achievements have resulted from adventure into fresh woods and pastures new. 6

Whilst there were no fresh woods at Palm Springs in 1936, Sunbathers amply demonstrates that the eighty-year old painter still retained something of the freshness and courage of youth.

1 Diana was the daughter of Eileen Lavery and James Dickinson, her first husband. It is clear that she hoped to be discovered as an actress. Later she married Paul Dupuis (1913-1976), a French Canadian actor who took romantic leading roles in films of the 1940s and 50s. Her portrait by Lavery was shown at the Royal Academy in 1934 (no. 179, private collection). Little is known about Lillian Millar, other than that she entered Laverys studio around 1936 when she posed for Summer (Lillian at Ranelagh) (unlocated). A head and shoulders Study for Summer was shown at Peppercanister Gallery, Dublin in 2001. Lavery made several attempts to work in the studios, but found that sets and lighting were changing so quickly that even he could not keep up. Apart from a series of unfinished sketches, the principal work which resulted from Hollywood studios was Shirley Temple and the Painter, 1936 (private collection).
2 Life, 1940, pp. 238 -245; McConkey, 1993, pp. 196-8. Lavery had met Coutts years before on the Riviera.
3 This self-portrait section was used as the dust-jacket illustration of The Life of a Painter, 1940 (Cassell and Co). There is no reason not to assume that in the re-stretching of the canvas, these minor alterations were made by Lavery himself.
4 Lavery may have felt that the spatial transition from foreground to background was unsuccessful.
5 The Times, 20 May 1937, p. 19.
6 Patrick Ford, Foreword, Exhibition of Paintings by Sir John Lavery, Kt., RA, RSA, September 1936 (exhibition catalogue, Victoria Art Galleries, Albert Institute, Dundee).
Whyte & Sons Auctioneers Limited, trading as Whyte's, hereinafter called "the auctioneer" exercises all reasonable care to ensure that all descriptions are reliable and accurate, and that each item is genuine unless the contrary is indicated. However, the descriptions are not intended to be, are not and are not to be taken to be, statements of fact or representations of fact in relation to the lot. They are statements of the opinion of the auctioneers, and attention is particularly drawn to clause 5 set out below. Comments and opinions, which may be found in or on lots as labels, notes, lists, catalogue prices, or any other means of expression, do not constitute part of lot descriptions and are not to be taken as such unless they are made or specifically verified by the auctioneers.